How much should you spend on marketing during a recession? Here’s what the research says 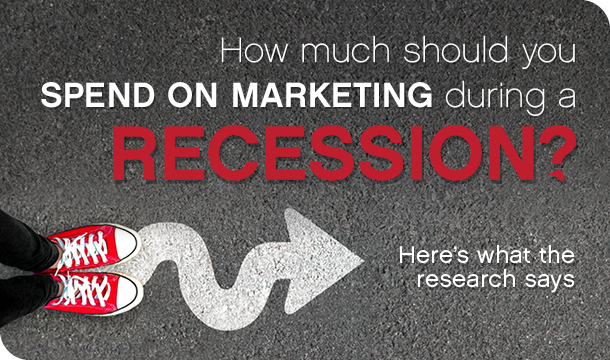 As COVID-19 sweeps the world, our economy is quickly going down the toilet (along with stockpiles of toilet paper). Unfortunately, we are likely already in a recession. For marketers, recessions have historically been scary times. Often, marketing seems like the easiest thing to cut. But is that wise?

As a marketer, if I wrote a blog post telling you to increase marketing during a recession, I’d look a little self-serving (to say the least). So instead, I decided to look at what the research tells us about marketing during recessions.

What I found is overwhelming evidence that it pays to maintain — and in some cases increase — marketing expenditures during an economic downturn. As Peter Fader of the Wharton School said, “As companies slash advertising in a downturn, they leave empty space in consumers’ minds for aggressive marketers to make strong inroads.”

Perhaps the most-cited research study on marketing during recessions comes from a McGraw-Hill Research study of 600 companies from 1980 to 1985. The study found that the businesses that chose to maintain or raise their marketing expenditures during the 1981 and 1982 recession had significantly higher sales after the economy recovered. And, companies that marketed aggressively during the recession had 256% higher sales than those that did not continue to market.

Of the sample, only 9% flourished after a slowdown, outperforming rivals by at least 10% in sales and profits growth. The study found that these high performers mastered “the delicate balance between cutting costs to survive today and investing to grow tomorrow.” This combination of defensive and offensive moves included a focus on greater operational efficiency along with investing “relatively comprehensively” in the future by spending on marketing, research and development, and new assets.

According to the study, “These companies also judiciously increased spending on R&D and marketing, which may produce only modest benefits during the recession, but adds substantially to sales and profits afterward.”

Another study by Harvard Business Review, “The Use of Advertising During Depression,” was published in 1927 and tracked the advertising investment and annual revenues of 250 companies through the depression and into the growth period following it. The study found that companies that increased their ad budgets during the recession grew sales much faster than those that did not, both during the recession and after it. 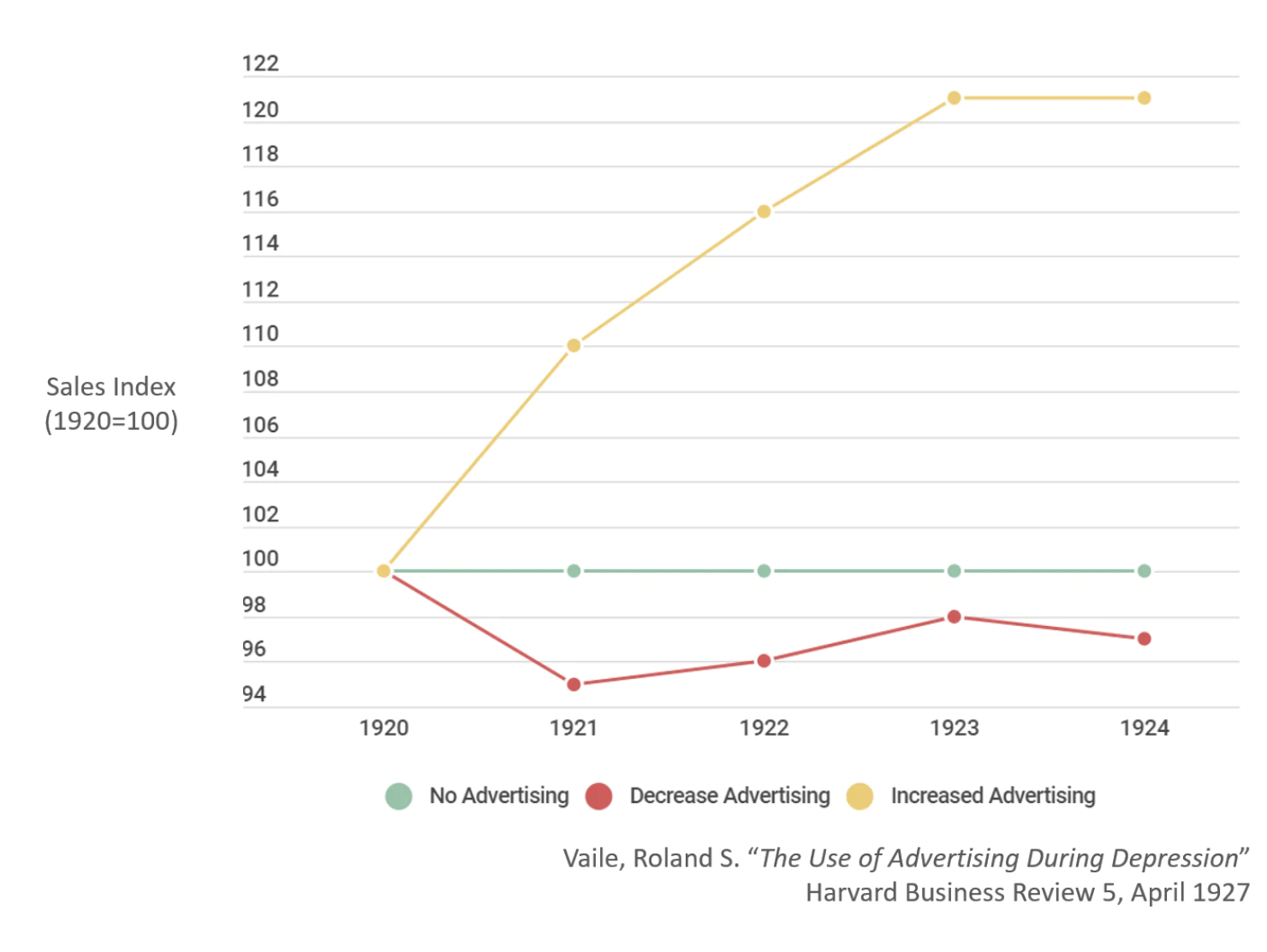 A more recent study by Bain & Company of nearly 3,900 companies worldwide during the last recession found that winners diverged from losers, with winners growing at a 17% compound annual growth rate during the downturn, compared to 0% among the losers.

Among other tactics, the winners played offense by reinvesting selectively for commercial growth — including maintaining marketing while competitors cut back. As an example, the report cites Samsung, which maintained marketing investment and focused on rebranding itself as an innovative company during the Great Recession. At the beginning of the downturn Samsung ranked No. 21 in brand value among Interbrand’s global list, and in May 2019 (the date of the report) the company ranked No. 6.

In a 2009 review of more than 40 empirical studies on the impact of marketing during and after a recession, researchers looked at studies from across the world covering every significant recession since 1920. The scholars found that:

In its 2002 study, “Learning to love recessions,” McKinsey studied nearly 1,000 U.S. companies over an 18-year period (1982 to 1999), including the U.S. recession of 1990 to 1991. The study found that while most companies tightened their belts, the winners traded “lower short-term profitability for long-term gain, refocused rather than cut spending.”

The authors of the study opined that at the time — nearly 20 years ago — marketing played a more critical role than it did during previous recessions. The study said that “while marketing’s role was once more informational than brand identity building, and considering that never more than today has the clutter factor been so great, relationships between customers and brands are critical.”

Arguably, marketing’s importance to the health and profitability of organizations has grown significantly more since the early 1990s, as the advent of the internet has transformed how companies build relationships with customers.

This last study did not review companies’ marketing expenditures and subsequent financial performance. Instead, the study, commissioned in 2001 by the trade association American Business Media, looked at how business-to-business (B2B) executives spend time with trade media during a down economy and how it affects purchase decisions.

The survey of 505 executives at U.S. companies with at least $5 million in sales found that:

We are just at the beginning of the COVID-19 crisis. While marketing may seem trivial at times like these, as the research shows, as Mark Ritson in MarketingWeek put it, “There are few things more proven in the world of marketing than the power of advertising in a recession.”

If you have questions about where your marketing dollars are best spent during these times, contact me at michelle@rep-ink.com or 904-374-5733.