February 12, 2019
by: Steven Gallo in Law , Public relations No comments 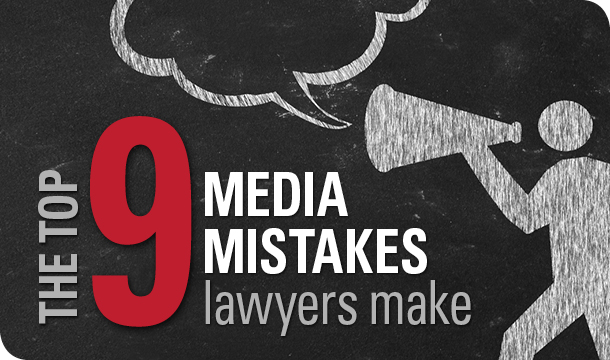 A solid public relations strategy is an essential part of a savvy legal marketer’s arsenal.

PR is a unique and powerful tool unlike other marketing efforts because it offers third-party validation: When a lawyer is quoted in an online news story, appears as a pundit on a news show or publishes something in an industry trade journal, that establishes his or her credibility in front of potential clients.

A lot of effort goes into securing that perfect PR opportunity: targeting relevant media outlets, pitching an attorney as a knowledgeable source and landing the interview. So it makes sense for lawyers to be prepared every time they jump on a call with a reporter or sit down for a broadcast interview in order to get the most out of it. This includes knowing the most common pitfalls when attorneys interact with journalists.

Here are some of the top media mistakes we’ve seen lawyers make in the past, and how to avoid them.

Most readers, viewers and listeners aren’t lawyers. Even if they are, you want to be conversational. Avoid jargon, acronyms and latin legal terms whenever possible. My advice: Speak slowly and talk in a way your grandmother could understand (assuming your grandmother isn’t Ruth Bader Ginsburg).

Can you think of a time when the response of “no comment” sounded good? Exactly. If you get stuck or caught off guard, don’t panic. Just pivot to a related talking point (in PR-speak that’s called “bridging”). If you can’t discuss a particular topic or answer a certain question, say so and then offer what you can talk about.

3. Failing to understand the news angle

Remember why this journalist is talking to you in the first place. A media interview isn’t a voucher for a free megaphone and a soapbox. Understand the angle of the story the reporter is working on, research some context ahead of time and find ways to offer your insight to answer their questions. Being a knowledgeable and effective communicator who offers value will have a greater impact than bragging about your firm ever will. It will also increase the likelihood that you’ll actually show up in the final article or broadcast segment.

4. Misleading a reporter or omitting facts

This one should go without saying, but it’s crucial that you be upfront about what value you can offer a journalist.

A good reporter is always going to fact check what you have to say, and being misleading can end up damaging your relationship with that media outlet (or even others) in the long term.

5. Forgetting that everything is on the record

Reporters may claim certain conversations can be “off the record,” but never say anything you wouldn’t want to appear online or in print. At the end of the day, they’re doing their job —  they’re not your BFF. Be on your guard from the moment you pick up the phone to the second you put it down. Oh, and for broadcast interviews, always assume the microphone is on! By now we’ve seen too many people get burned by this for you to be the next victim or infamous YouTube star.

6. Not getting a client’s permission in advance

If you’re going to be discussing a specific case with the media, you should always clear it with your client first. Never assume that it’s okay, even if you’ve posted about the client on your website or in marketing collateral — a media interview is a different ballgame. Be sure to get explicit permission to discuss the case with the news media before doing so (preferably in writing, but I don’t have to tell you that part).

7. Not working in tandem with co-counsel on PR

If you’re serving as co-counsel on a matter, don’t forget that there’s at least one other firm involved who may want to do PR as well. Be sure to coordinate with co-counsel on what their plans are, if any, to promote your efforts or do media interviews. Don’t wait until the last minute, either! Get on the same page early on so that you don’t end up duplicating efforts or putting out inconsistent messages. The same also goes for coordinating with any PR efforts your client might undertake.

We live in a world of blogs, smartphones, Twitter and a 24-hour news cycle. If there’s a major milestone in a case, a big settlement or verdict, or a significant deal that’s been reached, you have a short window of time before your news becomes stale. Plus, reporters monitor court filings, so if it’s public record with the court, then it’s already news and a reporter is probably on it already.

If you wait too long, a journalist may write a story on your news and move on to their next looming deadline. That’s a missed opportunity to have your firm’s perspective included in their coverage. If you work with a PR agency, make sure they’re briefed on the basic facts of a case before that major milestone comes along so you’re not scrambling when it’s go-time.

Again, today’s news moves fast. When you do get a bite on your pitch and a reporter wants to schedule an interview, don’t delay. Reply as soon as possible and allow flexibility to meet their schedules and deadlines.

Also, it’s unlikely that a reporter is going to wait around for you if they have a deadline to meet. Journalists have multiple sources and will quote the one who is most accessible and easiest to work with. As busy as you might be, the return on investment for a media interview with significant reach is worth the few minutes.

Now you have some solid tips to rock your next media interview. What’s that? You don’t have any opportunities lined up? We can help you solve that problem, too! Email me at steven@rep-ink.com or give us a ring at 904-374-5733, and let’s make you a media relations superstar.