May 5, 2016
by: Shelby Gambrell in Marketing strategy , Content marketing , Public relations No comments

We’ve all done it.

Dinner is simmering on the stove and, hey, I have a few minutes to kill. Let me just give social media a quick scan.

Then, before we know it we’ve watched three Tasty videos, an adorable (but worrisome) clip of dogs playing with a bear and received some life motivation from a pre-kindergartener. BAM.

Dinner burns and we find ourselves scraping burnt pasta from the bottom of our cast-iron pot, and eating Nutella out of the jar. Again.

Good content does that. It grabs ya and pulls ya in and makes ya want more.

Social media is especially good at this because it is just so … snackable. We can scroll through Instagram while waiting for our coffee. We can instantly “like” by tapping our thumbs around our Facebook app. Hours pass on Vine as you watch that kid receive a banana for Mother’s Day over, and over, and over again. 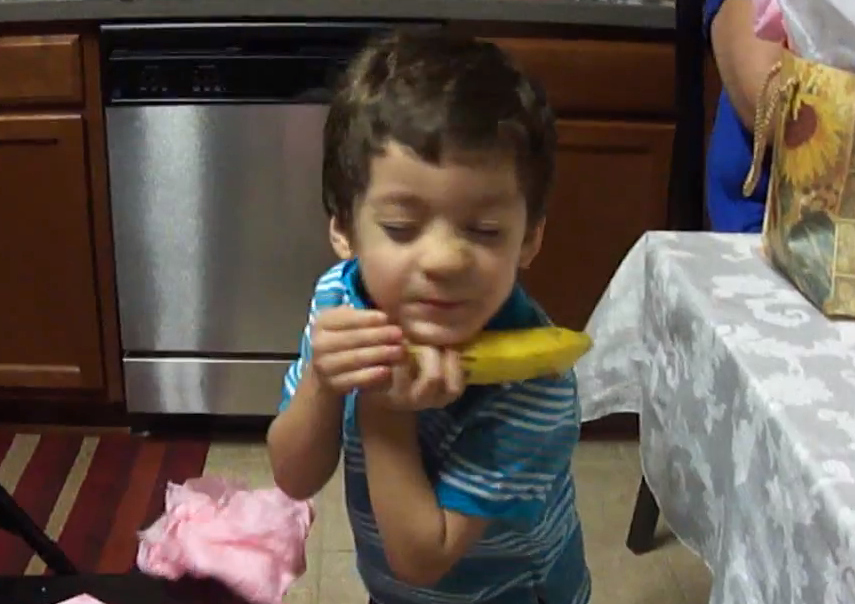 Just as much as it can pull us in, social media works to keep us connected. Following local organizations’ social accounts keeps us abreast of what is happening in our backyards and gives us a sense of community.

Scrolling through your local news feed, you might see an upcoming music festival, a new restaurant’s opening night and… unfortunately… mug shots and crime scenes.

By the very nature of their jobs, police departments stand out on social because they must protect the public. The result: a stream of Amber alerts, road closings, arrests, robberies and other crimes.

In addition, law enforcement faces another challenge on social media — negative public perception. Only 52 percent of Americans trust the police, tying a low in the Gallup Poll’s 22-year history.

Why does this matter? Whether or not the public feels good about its local police force can mean the difference between life and death. By changing perceptions, law enforcement agencies can help ensure that when cops arrive on the scene of a crime they are treated as friend — not foe.

Rocking the social boat: Positive posts in a sea of negative

That’s why, when I was scrolling through my own Facebook feed and saw a post from the Jacksonville Sheriff’s Office, it caught my eye. Rather than a closed bridge, local robbery or arrest, I encountered Officer/ Pilot Steve Strickland holding a sign reading “Family is everything.”

Wow, that was different. It was time to do some digging.

What I found was the #BehindtheBadge campaign, an initiative that has made its debut on law enforcement social accounts across the country. The campaign features images of police officers telling their personal stories as a way to humanize and connect the officers to the public.

What’s so great about #BehindtheBadge? Not only are the posts personal — which is the key feature of the campaign — but they are also interactive and useful.

All the #BehindtheBadge posts for the Jacksonville Sheriff’s Office have the same caption: 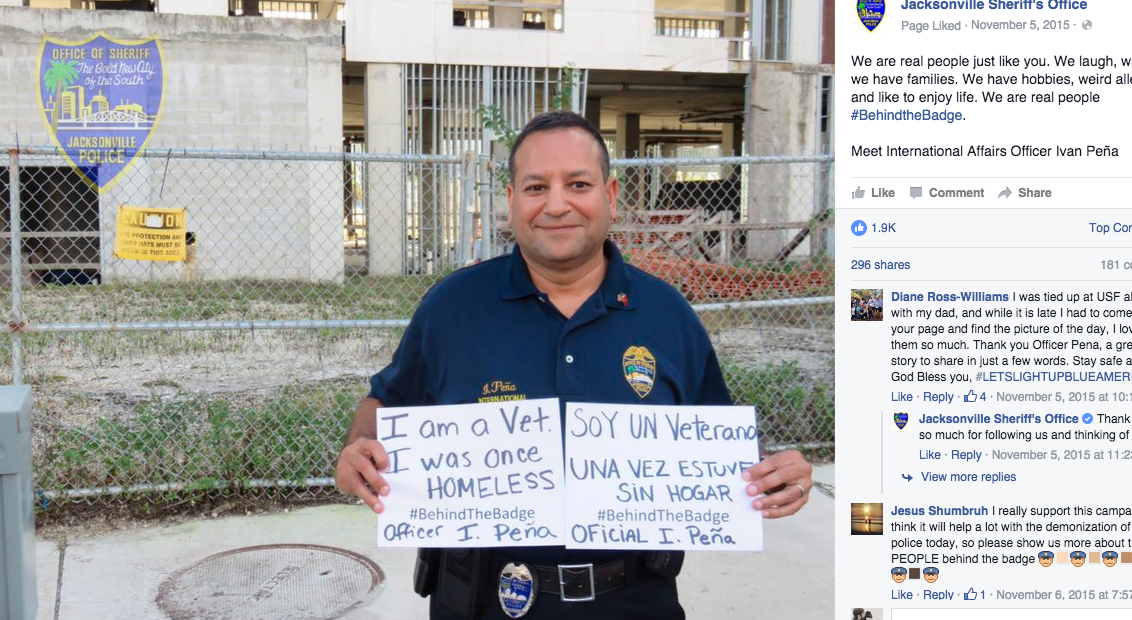 Some of the officers are personal in their signs, talking about their experience with homelessness or adopting their children through foster care. Others are lighthearted, talking about athletic achievements. Comments under these posts include, “It’s nice to meet you,” showing how well received the posts are.

For every sign, the message is the same — we are normal people. The campaign humanizes a civil service department sometimes thought of as intimidating, or detached, removing the “us-versus-them” wall.

Police Chief Kenton Buckner from Arkansas, also participating in a #BehindtheBadge campaign, believes it is more important than ever to show law enforcement in a positive light, saying that “given the recent history we’ve had with law enforcement and some of the things that have been illuminated across the country, it was important for people to understand police officers are human beings.”

Jacksonville Sheriff’s Officer Kevin Munger describes it in this way: “One of the common things you’ll hear is a parent tell their child or their little one that if they do something wrong, they’ll call the police and a policeman is going to take them away. We don’t want that.” 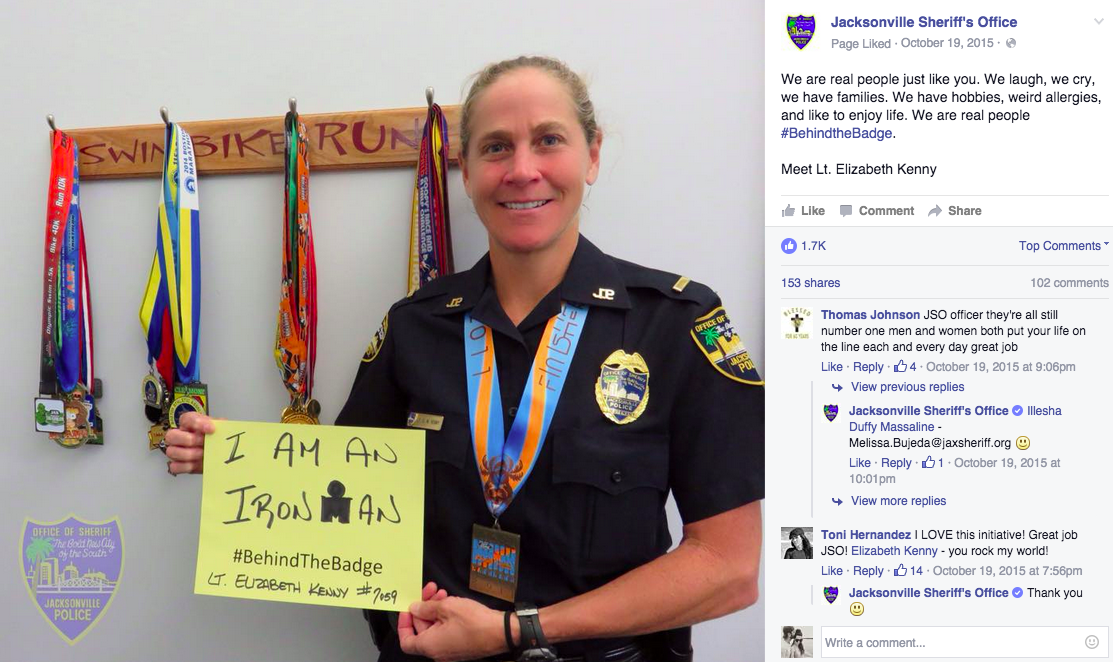 And while our own office pup Boomer is assisting in content marketing strategy, K9 Bandit is making the rounds and reminiscing about his home country of Holland. Small details like this make the police feel relatable — i.e., we’re all on the same team, ‘ya know? 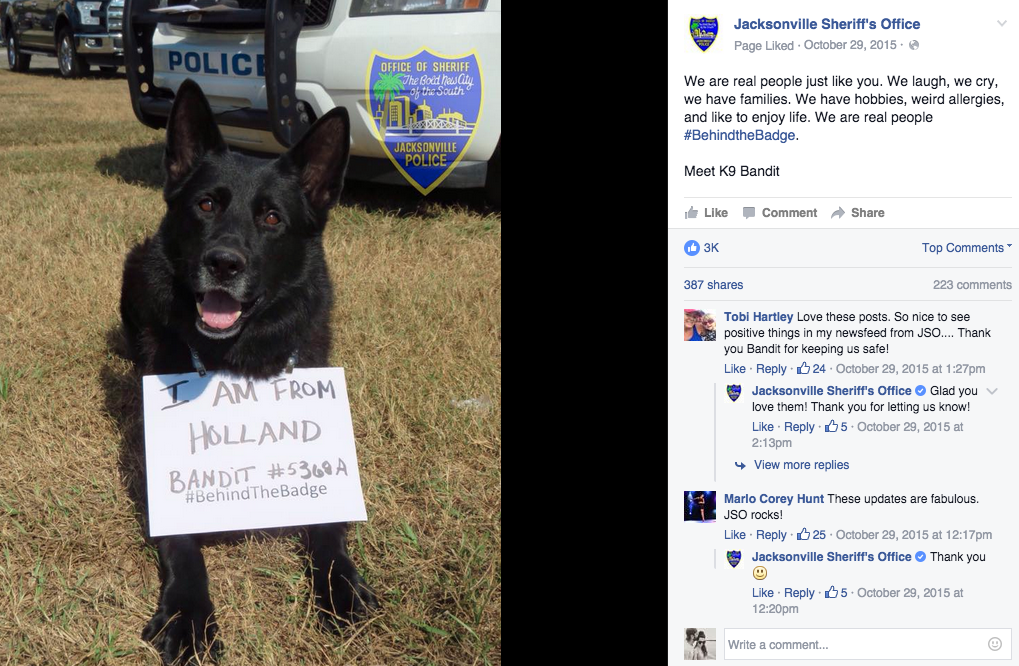 Not only is the account active, but it exceptionally interactive. Nearly all comments on pictures and posts are “liked” or replied to by the Jacksonville Sheriff’s Office. The owner of the account answers questions for followers, like “What is an Ironman?” (commented on Lt. Elizabeth Kenny’s photo above) and “How can you find out what lieutenant is over a certain zone?” 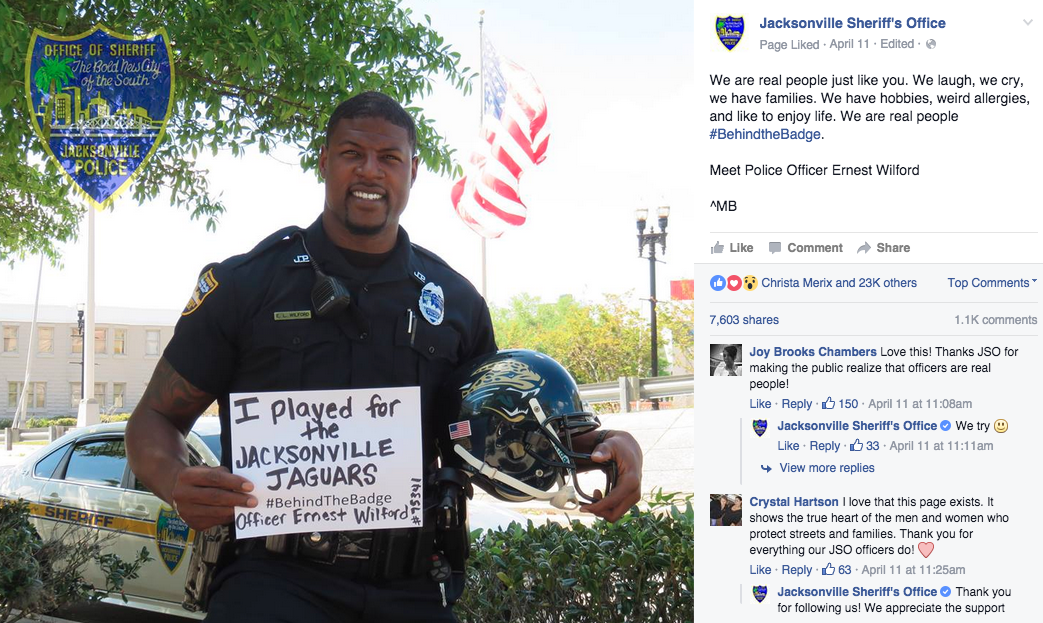 Companies (and civil departments) can be so cold; there is rarely a human face to put to your favorite shopping spot, or the local Applebee’s. When an actual human being responds to comments and questions, real perception change happens. 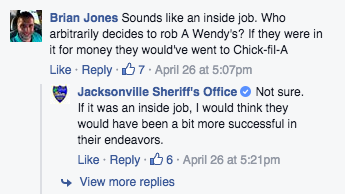 PoliceOne.com reports that one of the most important things for police departments (or any organization, for that matter) when building a social strategy is to produce content that has value for your followers.

The Jacksonville Sheriff’s Office posts relevant information that people care about. This includes dangerous suspects, traffic updates and missing children. Communicating in real time via social media helps prevent crime by keeping the community up-to-date and informed on mediums they are already using (to catch up on other important info, like cat videos and memes.) 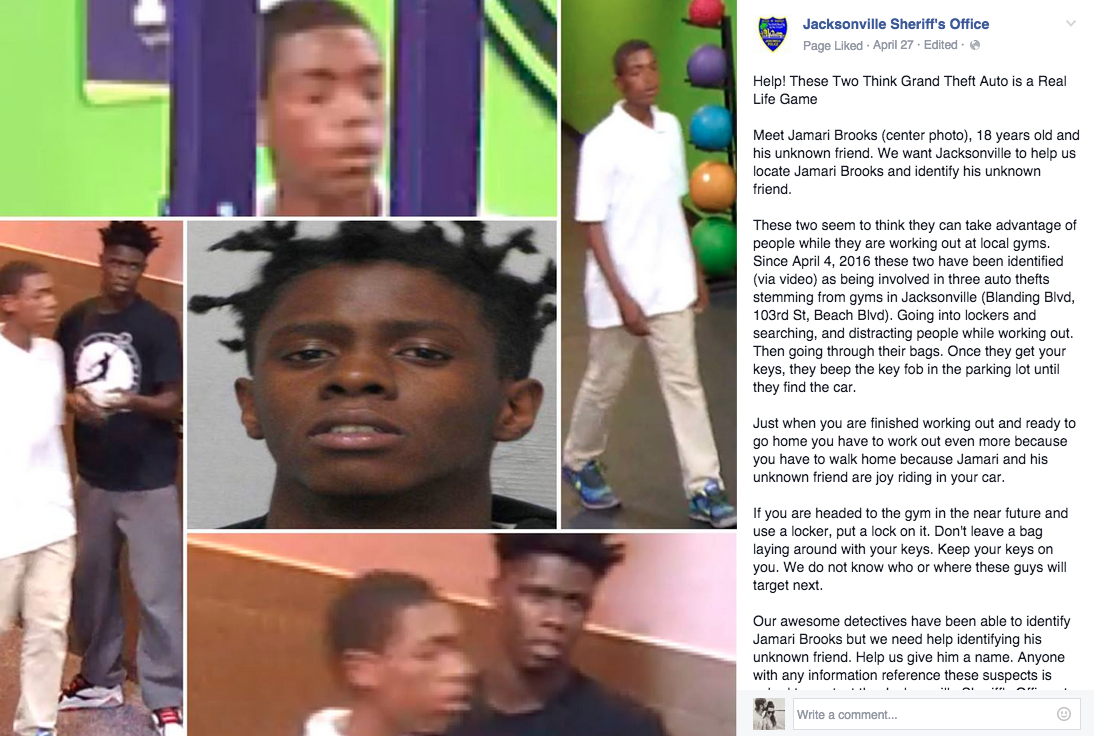 While not officially part of #BehindtheBadge, when posting about robberies or other local dangers, the department will also post tips to keep the community safe. And that’s just good social media strategy.

A final word: changing perceptions, one post at a time

Last November in New York, photographs of a police officer giving a homeless man shoes went viral. A day after it was posted, it had been viewed 1.6 million times and had received hundreds of thousands of “likes” and comments. When most images that the public sees of police officers are arrests and shootings, photos like this one truly stand out. 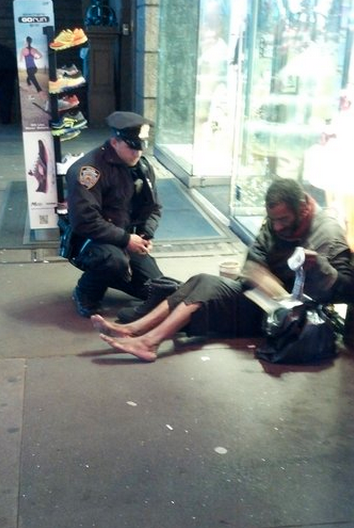 One comment on the post wrote, “I still have a grudge against law enforcement everywhere. But my respects to that fine officer.”

And that’s a start. It will take more than a few posts to counteract the avalanche of negative content that is thrown the police department’s way. But social media can be an effective way to quickly and consistently communicate with the community in a positive way.

What can your company learn from Jacksonville Sheriff’s Office’s social media accounts? Make it personal. Make it interactive. Make it useful.

Want to learn more about optimizing your social media strategy? Email me at shelby@rep-ink.com.

Shelby is a passionate writer and reader who loves working with companies to create the right content to build their brand. A self-professed “word nerd” Shelby edits novels in her free time, strengthening her writing muscles. She’s also an analytics geek, with a deep understanding of how to test content to enhance performance.