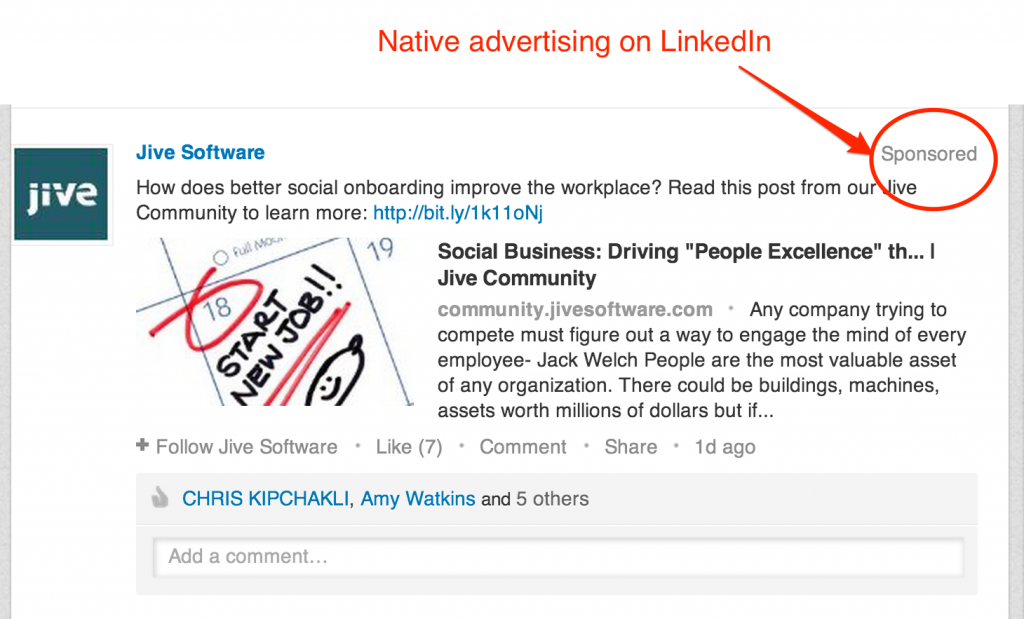 Basically, native advertising is the advertorial for the digital age. Remember the advertorial? Back when print media dominated, advertisers would purchase space and write an editorial-style article, however it would be clearly labeled as “paid” or “sponsored” content. Rather than a display ad, the advertorial format was “native”—it followed the form and function of the publication and was less interruptive to the reader’s experience.

Fast forward to today. With social and digital media dominating, the advertorial has been reborn, but in a much more complex and creative way. Think about Promoted Tweets, Facebook Sponsored Stories, LinkedIn Sponsored Updates and featured videos on YouTube—these are all forms of native advertising. In addition to these “in-feed ads,” traditional publishers are offering platforms for sponsored articles and other content, including Forbes’ BrandVoice, The Atlantic’s Native Solutions, and The Wall Street Journal’s WSJ Content Studios.

In sum, native advertising is branded content placed within third-party editorial sites, integrated seamlessly so that it mimics true editorial content. The advertiser produces the content, and the publisher’s platform hosts it. While it’s labeled as paid or sponsored content, the differences are often incredibly subtle. 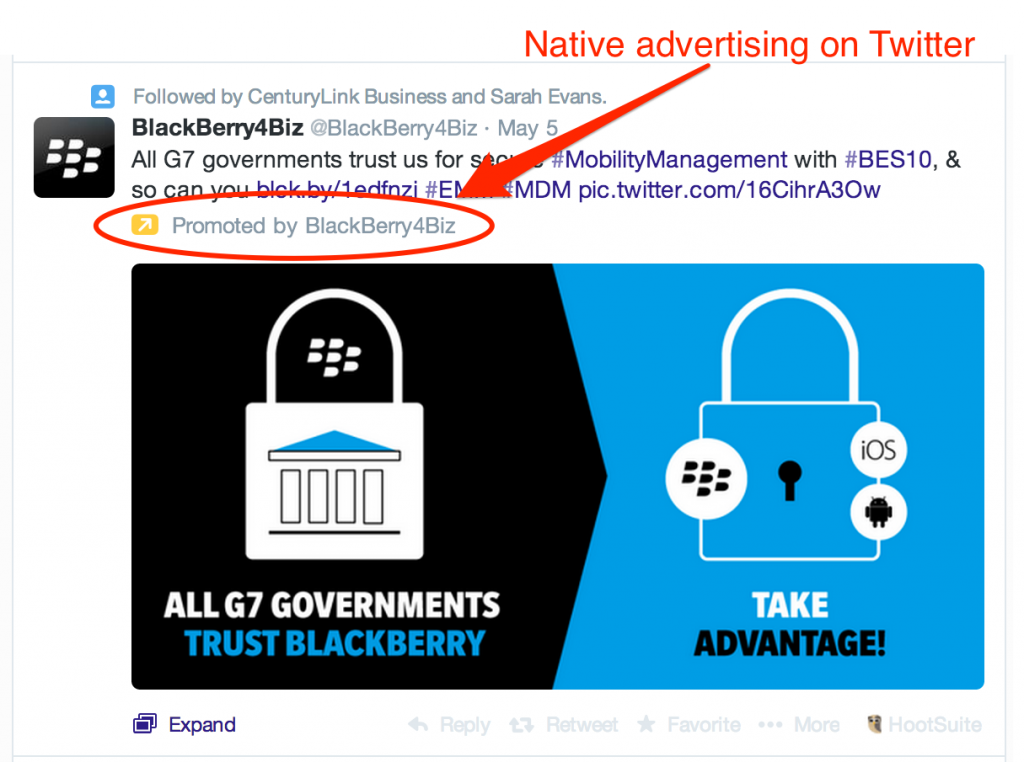 1) If done right, native advertising is highly effective. Research from IPG media lab found that native ads are viewed for the same amount of time as editorial content and are much more likely to be shared than a banner ad (32 percent versus 19 percent).

2) According to Copyblogger CEO Brian Clark, native advertising is the perfect accelerator for a content marketing strategy. Clark says: “In other words, you create owned media that is accelerated by paid media, with the primary goal of building your own audience in the process, but at a much faster rate. You’ll convert sales from your native ads while the campaign runs, but also into the future. Even better, you’re engaging an audience that you can present with other relevant offers and even new products and services—without running just another ad.”

3) As native advertising aims to mimic the editorial space where it lives, transparency is incredibly important. While advertisers are embracing the format in droves, many worry about conflicts of interest with traditional journalistic standards and ethics (the “wall” between “church” and “state”). Even the Federal Trade Commission—the body that regulates advertising—hosted a workshop titled “Blurred Lines: Advertising or Content,” to “explore the ways in which sponsored content is presented to consumers online and in mobile apps; consumers’ recognition and understanding of it; the contexts in which it should be identifiable as advertising; and effective ways of differentiating it from editorial content.” Bottom line—if already-skeptical consumers feel deceived by your content, the damage to your brand will be significant.

4) Google isn’t playing along. Well, really, Google is standing by its mission—to deliver credible, relevant and high-quality content to searchers. As such, Google treats native advertising differently than editorial content. Google’s senior director of news and social products Richard Gingras wrote on the Google News blog: “Credibility and trust are longstanding journalistic values, and ones which we all regard as crucial attributes of a great news site. It’s difficult to be trusted when one is being paid by the subject of an article, or selling or monetizing links within an article.” Google recommends that publishers clearly alert readers when content is paid for and to add the ‘rel=nofollow’ tag to keep it out of search results. This results in lower search rankings for paid content than true editorial content.

If you’d like more information on native advertising, including how to get started, contact me at 904-305-5979 or michelle@rep-ink.com.