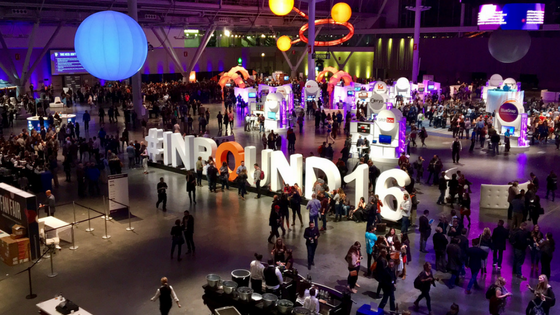 It was a whirlwind of a week for the Reputation Ink team, and no, unlike everyone on your Facebook feed, we’re not talking about the election. (You’re going to get enough of that at Thanksgiving, anyway.)

We’re here to talk about #INBOUND16, folks.
Our team spent last week in Boston for the annual conference hosted by HubSpot, and we picked up A LOT of good stuff along the way, from inspiring content strategy tips to buttery lobster rolls. Here are some of the key takeaways that got us thinking (and tweeting).

One of the first breakout sessions of the week was with Dr. Carmen Simon, cognitive neuroscientist and founder of Memzy. Her session — “Could a Robot Create Your Content?” — focused on striking the balance between humans and machine automation in content creation. At the end of the day, humans crave interaction with other humans, said Dr. Simon.

Great talk by @areyoumemorable on the importance of humanity in an increasingly robotic world. Thanks for the insight! #INBOUND16

Adam von Reyn is the Vice President of Growth Marketing at InsightSquared. His session featured one of the more straightforward titles at the conference: “Inbound or ABM: How the f*@! do we choose?” In the “battle” between inbound and account-based marketing, von Reyn explained why the smartest marketers are choosing not to choose.

Inbound vs. ABM is a false choice. Develop a strategy that works for you and your market. @insightsquared @adamvonreyn #INBOUND16

When deciding between inbound & ABM: make sure your strategy focuses on customer experience, not just KPIs. @insightsquared #INBOUND16

After an epic video introduction, the co-founders of HubSpot each gave “big picture” keynote presentations. Halligan recapped the 10 years of growth and change the industry has seen since HubSpot’s founding in 2006, making bold claims like, “Cold calling is dead.” Shah spoke to how messaging is the new search and why chatbots are the way of the future.

The spotlight session with Pulitzer Prize-winning author and New York Times journalist Charles Duhigg was a crowd favorite with the Reputation Ink team. Duhigg explored the qualities of productive people and the importance of creating cognitive routines to be successful and creative.

"Creativity isn't about waiting in a room." #INBOUND16 #charlesduhigg

"Focus is visualizing what ought to happen and then challenging yourself." -@cduhigg on creating creative contemplative routines. #INBOUND16 pic.twitter.com/x0C5BZKhZj

"Motivation expands when we feel in control." @cduhigg #INBOUND16

TapInfluence CEO Promise Phelon drove home the importance of social media influencers in a world where ad blocking costs publishers nearly $22 billion in advertising revenue in 2015. She discussed how brand marketers and social media influencers are collaborating to generate leads and drive sales. It’s not just about B2C or B2B anymore — it’s all about B2H, business to human.

Consumer-led marketing: Forget getting in your customer's face. Focus on getting FOUND where they are LOOKING. @PromisePhelon #INBOUND16

"Today, brands can't speak for themselves ... influencers can take [a] product ... and provide context." @PromisePhelon #INBOUND16

Oscar-winning actress and chart-topping singer Anna Kendrick was among the star-studded keynote speakers at INBOUND this year. She pulled back the curtain on what it’s like being the star of the record-breaking Pitch Perfect series and what digital marketers can learn from social media-savvy celebs.

We wrapped up our trip with Alec Baldwin’s keynote session. His conversation ranged from 30 Rock to the state of the entertainment media and what it means for digital marketing and sales. (And yes, he did throw in some Trump impressions.)

"We need a place to go for smarter, better content on the internet. We need media people to be braver." -@AlecBaldwin #INBOUND16 pic.twitter.com/ynb0bin9C3

In case you couldn’t tell, INBOUND 2016 was a blast and our team learned a lot. Not only did we glean a lot of great tips and tools to serve our clients, but we also got to chat with a number of thought leaders and speakers on camera.

Look out for those exclusive interviews and more from our time in Boston coming soon to an INKsights post near you!

Are you wishing there was an easy, digestible way to share some of our INBOUND insights with your friends? (Of course you are.) We made this #INBOUND16 takeaways infographic just for you.