Make Your Mark on Inbound Marketing with Storymaking: How storymaking helps you connect with your audience 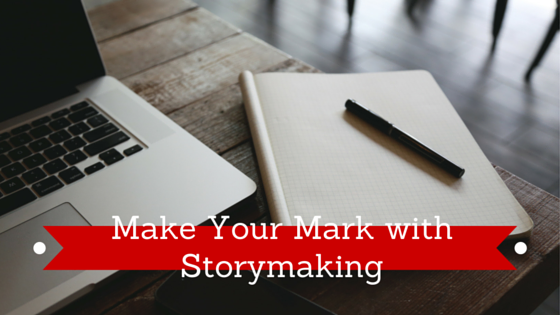 One evening about a year ago, I found myself trying on glasses frames for about two hours in my apartment. I don’t even wear glasses. But my former roommate Victor does. He had ordered five pairs of frames from Warby Parker as part of their free five-day home try-on offer. I thought this was the coolest thing; I’d certainly never heard of anything like it. And as a college gonfiabili student with no discernible income, being able to try on glasses at home for free was pretty damn great, even if I wasn’t looking for glasses in the first place.

Victor and I tried on all five pairs he ordered and explored dozens of other designs on the Warby Parker website. I had to wonder: what was the reason behind such an awesome try-on offer? Their company story is fascinating. It began when the founders’ frustration with crazy-expensive glasses finally boiled over. They wanted to make sight—a basic necessity—more readily accessible to those in need of glasses. And so they did.

Warby Parker offers its audience direct insight on what it’s like to work there—their culture, their mission, their reason for doing what they do. I felt like I was truly getting to know the people behind the company, and that made me all the more excited to explore their products. It was their story that really drew me in (and also the reason I bought a pair of sunglasses from them).

People crave stories like theirs. It’s no wonder inbound marketing has moved us away from “sales speak” and pushed us in the direction of storytelling. (I think we can all agree we’re happy about that.) Stories are an opportunity to connect with someone else, which is the ideal relationship you want to have with your audience—a connection that goes beyond the marketplace.

If marketing is an effort to gently push people to do something, emotion is the ever-elusive final nudge that gets them there. According to a study done by the Institute of Practitioners in Advertising (IPA), emotional campaigns were twice as effective as purely rational ones.

The researchers, Les Binet and Peter Field, attributed this statistic to our brain’s ability to process emotional input without cognitive processing. You don’t have to think about what makes you feel something, you just know you feel it. When a commercial or a written story makes you feel something—regardless of what the company may be selling—you feel connected to that company.

Evoking affection in your audience may not be necessary for immediate sales. But in terms of growth over time, it’s vital. You’re building a brand rather than a sales pitch. Check out this graphic from the same study: 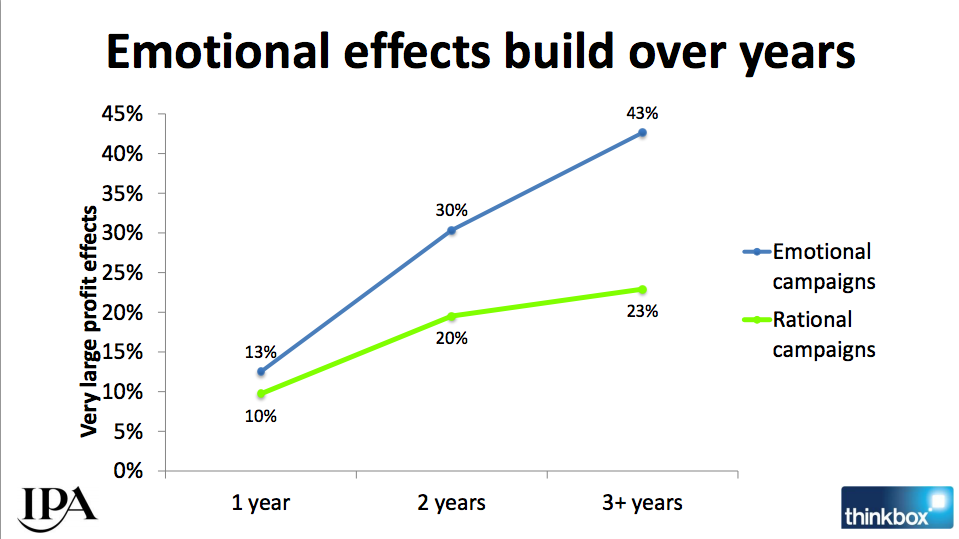 Emotional campaigns are a more effective driver of conversions. Taken from IPA. 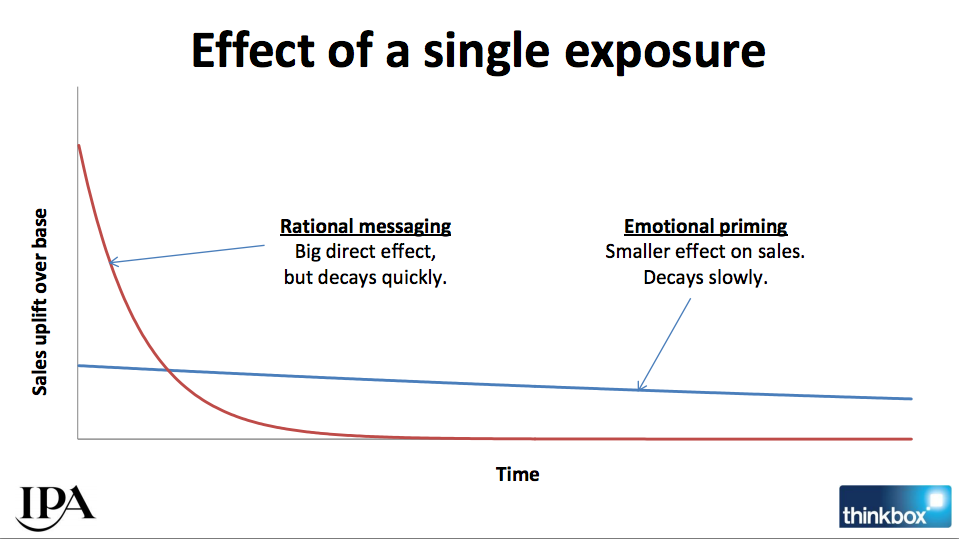 An emotional appeal has a longer-lasting effect on sales than rational messaging. Taken from IPA.

An emotional appeal takes time to work but has a longer-lasting effect on consumers. They’re more likely to remember an emotional connection than a series of facts and reasoning meant to persuade them. Statistics don’t mean anything to individuals unless you show them why they should care about those statistics. For example: I’m not a serious runner. So I could care less that Nike’s latest shoe weighs only 7.4 ounces. But I’m active and want a solid running shoe. I’m going to be sold by identifying with Just Do It—the lifestyle Nike promotes.

Make your own story, don’t tell someone else’s

It’s not enough to simply tell a story. Anyone can do that. You have to make a story. Sounds weird, I know.

I’m reaching into the bag of Inbound wisdom once more, because, let’s be honest, Inbound never dies. David Berkowitz, chief marketing officer of MRY, gave a presentation at HubSpot’s Inbound 2015 conference that made the distinction between storytelling and storymaking. The difference? Customer-centricity. 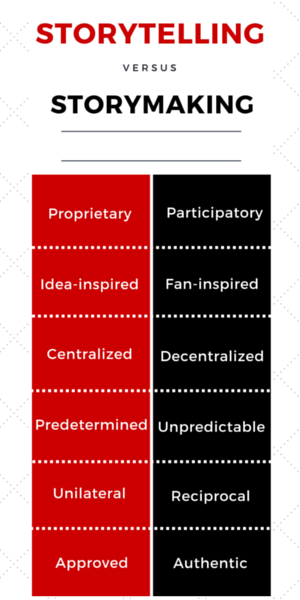 4 tips for making a story

At first, I figured I’d highlight major advertising campaigns from already-famous companies like Coke, Google and Nike. They’re all masters of marketing, and have created some of the most memorable campaigns out there. But I thought it’d be more useful to show how companies on the outskirts of the national limelight are kicking ass and taking names through storymaking.

What these three companies illustrate, similar to Warby Parker, is the recognition of how their unique origins resonate with audiences. They reach beyond their products to make a conscious effort to share their story and, more importantly, include their customers in it. I became a part of Warby Parker’s story without ever having intended to, all because they gave me the opportunity to connect with them on a personal level.

Have any more tips on how to make your own story?