Publicity stunts can be bold – just don’t let them backfire

March 18, 2015
by: Reputation Ink in Public relations No comments 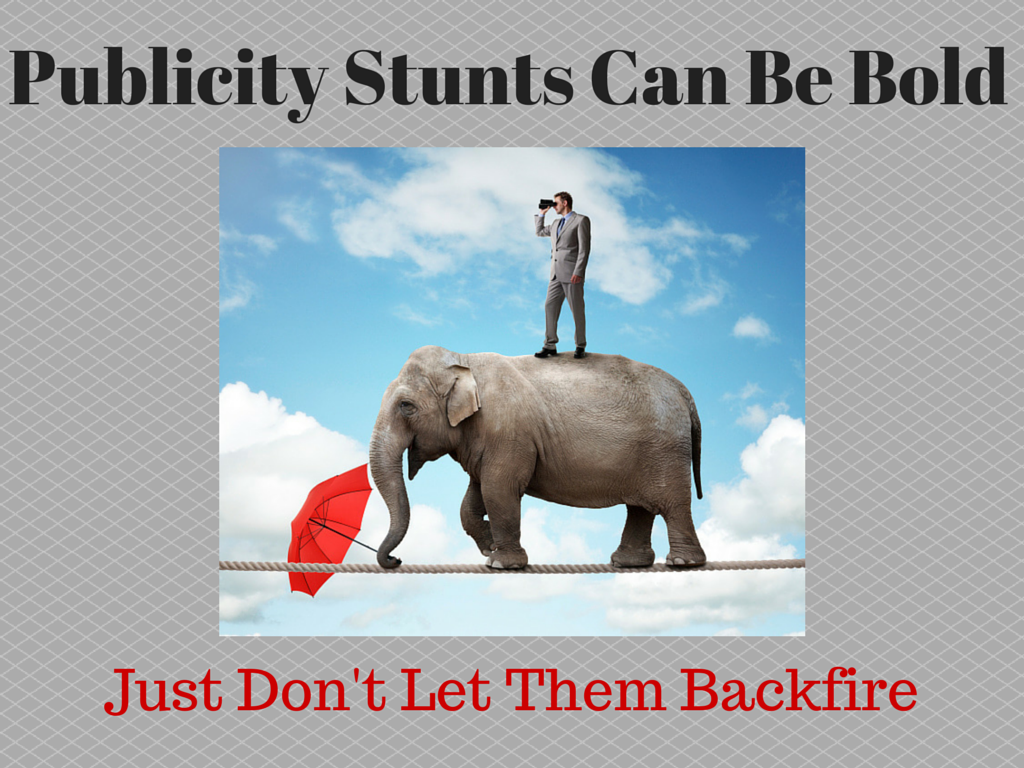 For years, PR and marketing stunts have been doing what they are designed to do – make media headlines and generate attention with the public. One of the earliest publicity stunts was in 1896 when the Missouri-Kansas-Texas Railroad organized a staged crash between two full-size trains in Crush, Texas. Attendance was free with 40,000 people viewing the crash, but unfortunately the stunt backfired – some of the attendees lost their lives when the train boilers exploded blasting bolts, iron scraps and debris into the crowd.

Since then stunts have come in many forms, and some have even gone from stunt to time-honored tradition such as the Macy’s Thanksgiving Day parade. As the world has gone digital, so have stunts with some receiving the most attention via social media and some beginning on social platforms.

Social Stunts
In a way, 2014 was the year of the social stunt – from the ALS ice bucket challenge to Ellen’s Oscar selfie to JCPenney’s #TweetingWithMittens. Each campaign utilized the power of social media, Ellen’s selfie was seen by 37 million people, while gaining traditional media attention throughout the process. While each of these three campaigns was successful in its own way, the ice bucket challenge motivated more than three million people to donate to the ALS Association, making it one of the most successful stunts of all time.

Spirit Airlines
Perhaps better known for charging a fee for everything than for its airfare sales, discount airline Spirit raised eyebrows earlier this week with its latest stunt. The company recently added its sixty-ninth plane to its fleet and decided to celebrate by offering $69 round-trip airfares. Seems reasonable, right? Then came the promotional stunt. The airline sent out an e-blast with the subject “We love 69.” But wait, there’s more. The body of the email went on to describe why they love 69. The sale seemed too juvenile to some, prompting media outlets to reach out to the airline to see if its website had been hacked. It had not. While it certainly is a bold play on numbers, is it effective in converting attention into sales? Time will tell.

Create Your Own Stunt
Creating a stunt can be a great way to get positive attention – if the stunt is executed correctly and truly showcases what your company is trying to promote. In the example above about the staged railroad crash, the story became those who unfortunately perished during the stunt – not exactly what they wanted as an outcome. If you’d like to coordinate a stunt for your company, here are a few tips: Start with the end in mind. What are you trying to accomplish with the stunt – media attention, general awareness, fundraising, other?

There are numerous examples of things you don’t want to happen when it comes to your stunt.

When it comes to publicity stunts, sometimes a small splash can turn into a big story. Just be sure to think it through! Comment below and let us know your thoughts on PR and marketing stunts. Are they effective?