As wild weather bombards parts of the nation, it’s time for Reputation Ink’s round-up of the week’s wildest stories in PR, marketing and social media. Which companies and tactics weathered the storm? You be the judge:

Judge’s ruling not the result Google was searching for

Just about anyone who’s ever sent a text message has cursed the autocomplete feature that turns innocuous words into embarrassing gaffes. Those headaches pale in comparison to the legal fix facing Google, however. This week a court ruled that a Hong Kong billionaire can sue Google for defamation because the search engine’s autocomplete results suggested he has links to organized crime. Entertainment tycoon Albert Yeung filed the lawsuit after Google refused to remove the allegedly defamatory autocomplete suggestions that appeared when users searched for his name. The legal setback follows a recent ruling by the European Union’s top court requiring Google and other search engines to respond to requests for removal of links to personal information.

The Guardian reported this week that some of the world’s biggest PR firms say they won’t represent clients who are skeptical of man’s role in influencing climate change. In separate surveys conducted by The Guardian and the Climate Investigations Centre, WPP, Waggener Edstrom (WE) Worldwide, Weber Shandwick, Text100 and Finn Partners said they will neither represent climate-change skeptics nor manage campaigns aimed at blocking regulations that would limit carbon pollution. “We would not knowingly partner with a client who denies the existence of climate change,” WE spokesperson Rhian Rotz told The Guardian. Critics of the firms’ position, however, noted that advancing a global climate-change agenda has become big-business for the world’s PR firms, which stand to make millions from framing the issue for companies and governments around the world.

Last Week Tonight host John Oliver skewered native advertising, blasting it for blurring the line between editorial content and advertising to the point that consumers can no longer tell the difference. In a hilarious takedown of the popular advertising format, Oliver noted, “A recent study showed that less than half of visitors to a news site could distinguish native advertising from actual news. And of course they can’t. Because it’s supposed to blend in.” After giving numerous examples of reputable media outlets that have succumbed to the native advertising craze, Oliver offered a novel solution. “Every time advertising sneaks into our news and ruins it,” he suggested, “our news should be able to sneak into their advertising.” 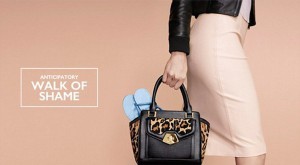 Media outlets and consumers alike were debating whether Nine West’s new ads are a clever way to reach the company’s target audience or a sexist insult to women everywhere. From newspapers and TV talk shows to social media, the reaction seemed to skew toward the latter. In the new ads, Nine West suggests that it offers shoes for just about every occasion – including hunting for a “starter husband,” taking the “walk of shame” home from a one-night stand or “drunch” – a drunk lunch. On Twitter, both men and women said the ads offended them, with more than one woman telling the popular shoe brand to “take a walk.”

And the winner of this week’s “Create the Very Situation You Were Trying to Avoid Award” goes to the Union Street Guest House in Hudson, New York. After word spread that the bed and breakfast had a formal policy whereby wedding parties would be charged $500 for every negative hotel review posted on Yelp – by anyone associated with the wedding – irate social media fans posted more than 3,000 negative reviews in about 24 hours. While some reviews merely bashed the B&B for its retaliatory policy, others claimed to have had horrible experiences at the inn ranging from cockroach-infested rooms to surly staff members to concerns about catching the plague from mounds of mouse droppings.  The inn’s owners later claimed that the policy — which had been posted on its website — was meant as a joke and had never been enforced. Several guests, however, claimed to have been asked to pay up for bad reviews posted by their wedding guests. Yelp ended up removing virtually all of the reviews – but not before the Union Street Guest House’s Yelp rating plummeted to a lowly 1 star.

And that’s a wrap – have a great weekend!