July 11, 2014
by: Reputation Ink in Public relations No comments

First, the losers: “Insensitive” was the word of the week, as major retailers got raked over the media coals for using images of historic tragedies in their sales and marketing efforts.

American Apparel, we have a problem

When a social media manager for American Apparel posted a photo on the brand’s Tumblr account of “#smoke” and “#clouds,” it didn’t take long for people to point out that the image was actually a photo of the 1986 space shuttle Challenger explosion that killed seven astronauts, including the “first teacher in space,” Christa McAuliffe. The company’s apology – which blamed the error on a young foreign employee – did little to quell the online criticism. Digiday’s coverage of the gaffe included images of numerous tweets and posts, including one tweet that observed, “That’s what happens when you have Millennials run your social media accounts.”

Art, like beauty, is in the eye of the beholder. But several major retailers learned that home decor is subject to the limits of commercial good taste, when it was discovered that Walmart, Amazon and Sears were selling framed prints of the notorious Nazi death camp, Dachau. The poster depicted the gate’s famed iron legend “Arbeit Macht Frei” – or “Work shall make you free.” Apparently, the cruel irony of the inscription was lost on Walmart, which promised the poster would “make a great addition to your home or office.” Maybe not: After influential blog Wonkette discovered the poster and social media users also expressed outrage, the retailers apologized and removed the item from their sites.

On a more positive note, there were a number of PR “winners” this week, as everyone from major media outlets to a gutsy amateur chef earned plaudits for their savvy strategies.

Digiday reports that venerable Time magazine has injected new life into its social media efforts. In addition to adjusting word lengths, Time has begun optimizing headlines and conducting weekly analyses of what’s working – or isn’t. The result: a 44 percent increase in Facebook “likes” in just three months to 5.4 million, surpassing popular sites such as BuzzFeed, Huffington Post and NPR.

When a Denver-bound Frontier Airlines plane got diverted to Cheyenne due to bad weather, the plane’s pilot ponied up for dozens of pizzas to be delivered to the plane stranded on the tarmac. Grateful passengers posted photos and videos of flight attendants passing out the pizza, resulting in a storm of free, positive PR for the airline. Frontier’s PR bonus is a good example of effective use of social media: Had the airline sent out a press release boasting about the pilot’s generosity, the move would have seemed self-serving. But by letting passengers tell the story themselves, the airline was left to bask in the glow of the feel-good story. 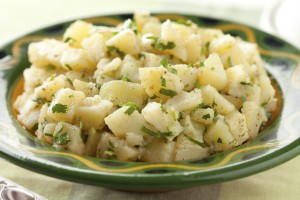 Disclaimer: This is plain old potato salad, not Zack Danger Brown’s $46,000 potato salad. Image is for illustrative purposes only.

And That’s a Wrap!’s “winner of the week” nod goes to Columbus, Ohio resident Zack Danger Brown, who started a crowdfunding campaign on Kickstarter to fund his dream of preparing some potato salad. Since launching this ambitious endeavor, Brown has raised more than $46,000 and counting, and scored massive amounts of media coverage – all in his attempt to make a tasty side dish. Brown’s success has of course spawned copycats seeking to cash in on his ingenuity and determination, but he hasn’t let the imitators distract or deter him from his fulfilling his Herculean undertaking and achieving his dream. Because after all, “Danger” is his middle name.