The craziness of college football struck again (or maybe it was just Katy Perry). Week 6 turned down for nothing, full of upsets, Star Wars, traveling goalposts, celebrities and more. And with that, CFB marketing and public relations certainly delivered, so let’s get to it. Here are our hits and misses.

#VolNation, you asked and you responded. Thank you for being the best. #CheckerNeyland #BeatFlorida pic.twitter.com/ebZY0s0rtk

What’s orange, white and checkered all over? Tennessee’s Neyland Stadium on Saturday, thanks to some serious social media, a microsite and, of course, dedicated Vols fans. According to the Chattanooga Times Free Press, the stadium’s look for the Florida game was inspired by graphic designer Spencer Barnett’s photoshopped image of the stadium on Twitter.

If Oklahoma can stripe their stands in shirts, I don't see why this can't be done in Neyland…. #VolArtConcept pic.twitter.com/H6jYHMI2Qx

The push to make it a reality started with two Knoxville-based web developers who launched a microsite, checkerneyland.com. By visiting the URL, ticket-holders could enter their section, row and seat to find out which color shirt to wear. Tennessee officials endorsed the #CheckerNeyland movement after reps from the UT athletic department spoke with the developers after the site launch, reported Patrick Brown. The movement was clearly a success, and you can watch the whole thing come to life in this mesmerizing time-lapse video

Week 6 was abuzz (we had to) with hits from the folks at Georgia Tech. Recognizing that football helmets on the field weren’t enough to put students in the stands, the athletic department turned to a different kind of helmet for Saturday’s Miami matchup—the intergalactic kind. If students registered for the annual #GTWhiteout game in advance AND attended the game, they were entered into a drawing to win one five authentic Star Wars Stormtrooper helmets. The first 2,500 students received free Stormtrooper masks.

Lesson from @GTAthletics: Give students something they want. Giving away 5 Stormtrooper helmets NEXT weekend pic.twitter.com/LbRYwTrQxd

The force proved to be with the Yellow Jackets in the stands and on the field Saturday night.

Georgia Tech’s concession stands got in on the fun, too. The school made history Saturday night, becoming the first college sporting event where concession sales could be made using bitcoin (a virtual currency).

The Chick-Fil-A Peach Bowl may be in December, but the organization is already playing games. The Chick-Fil-A Peach Bowl’s #Blitz4Tix contest ran from Sept. 27 through Oct. 4 and gave fans the opportunity to win one of five pairs of Chick-fil-A Peach Bowl tickets or one pair of College Football National Championship Game tickets. Fans could participate by following Chick-Fil-A Peach Bowl on Twitter, Instagram and Facebook where they posted location clues to where the tickets were located. Thus, participants blitzed for the tix. A pretty cool idea to engage fans on social media, in-person and months before their event.

Exit here for today's tickets. You can claim them starting at 5:30pm! #Blitz4Tix pic.twitter.com/gjAFmSWDgp

After five weeks of posts, y’all should notice a theme among our hits. We feature schools who put fans first. USC is getting in on the action with its State Farm Fan Fest. The pregame event gives USC fans the “ultimate fan experience” with food, music, games, giveaways—all free of charge. Hats off to the event for making pregame festivities an all-inclusive experience. While some fans host tailgates or attend friends’, there are plenty of college football fans (notably new students) who may not have a designated place to go. The event provides all Trojan fans with a true, engaging community before kickoff, averaging a whopping 40,000 people per home game.

Check out these courtesy photos illustrating the Fan Fest from the Arizona State matchup. Hyundai partnered with Tastemade to give fans an interactive food tasting experience and giveaways. 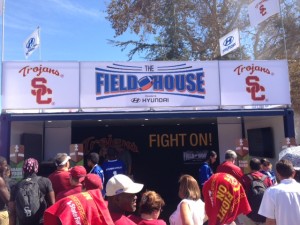 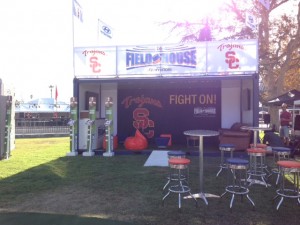 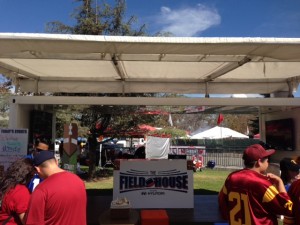 Actor Matthew McConaughey did something pretty special last week. He put on a shirt AND shoes, oh and paid a visit to a Texas Longhorns practice. He gave a motivational speech to the players and lucky for us, all of it was captured on film courtesy of the Longhorn Network. The video has nearly 2 million views and features McConaughey sharing some wisdom, his son looking incredibly bored and, arguably the best part, the team joining in on the actor’s famous Wolf of Wall Street humming routine.

The craziest stuff from Week 6 came out of Oxford–from start to finish. Before Ole Miss and Alabama kicked off, Katy Perry shook it up on the set of ESPN’s College GameDay as the game’s guest picker. Donning a fuzzy pink sweater and festive Ole Miss hair, she hurled corn dogs in honor of LSU and hit on Oklahoma’s QB. How is Perry tied to the Rebs? Her manager and mentor are both alumni.

Then, came the real insanity. When Ole Miss upset No.1 Alabama, the Rebels REALLY lived up to their name. Fans rushed the field and tore down both of Vaught–Hemingway Stadium’s goal posts. SB Nation collected some great social media posts chronicling the goalposts’ tour of the town.

By the way, Katy Perry predicted the Ole Miss win and had a good ole time in postgame festivities, too.

We dub this a hit not because of the upset but because of the university’s support of relishing in the celebration. The administration was supportive of students, with Ole Miss AD even tweeting he wanted a piece of the goalposts, too.

@BucknerCorso @CoachHughFreeze Be careful cutting it or we can help you be safe and cut it up for you…..

The reason why it dances on the line of a hit and a miss is because of the damage resulting from the celebration. Ole Miss received the max SEC fine of $50,000 for letting fans storm the field. Oh, and the Rebs may have won the game but they lost their goalposts. It’s costing Ole Miss $22,000 to replace ‘em. Fans and alumni are stepping up, though. Nearly $15,000 has already been donated to help cover the fine and replacement goalposts.

Ole Miss fans continue to show their love for their University. 180 people have donated $14,000 towards GP & fine. http://t.co/GkNrLtU4kX

The University of Minnesota Bundles Athletics Season Tickets for Students

Breaking news: just because you’re a college student doesn’t mean you’re a college football fan. The University of Minnesota seems to have trouble accepting that. The U was forcing football on students, requiring students to buy football season tickets if they wanted season tickets to other Gophers sports. According to this Star Tribune article, it cost $400 for a student hockey fan to get season tickets due to the fact they were bundled with football tix. This Minnesota Public Radio article quotes University of Minnesota Senior Associate Athletic Director Chris Werle saying the bundling was done “as a way to reward the best fans.”

Well, students saw it as unfair and expensive, and last week the Student Senate passed a resolution to stop the bundling. Minnesota Governor Mark Dayton also weighed in, writing a letter opposing the policy to the university president. One day later, the university announced they would no longer require students to buy football season tickets to access other sports. Better late than never.

Trust us, we know. Nobody’s perfect and everyone certainly makes mistakes. In college football, there’s an insane amount of names out there. Plus, let’s address the obvious here. Holtz has been around awhile. Give the guy a break, right? But the mistake is controversial and a miss for two reasons. First is the obvious racial implications behind mixing up “Ameer” and “Mohammed.” The second, and perhaps biggest thing here, is that Abdullah isn’t a no-name player. In fact, he’s currently No.4 on ESPN’s Heisman Watch list. You know, a list Holtz’s employer puts together.