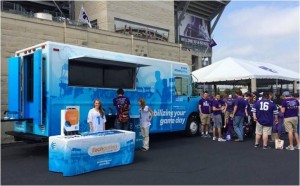 AT&T has taken its NCAA Corporate Champion partnership to new activation levels with #techgating. What is #techgating? AT&T defines it as: “Where tech meets the tailgate to create a better game day.” You can even win a trip to the 2015 College Football Playoff National Championship by tweeting your tip, video or trick with the hashtag #techgating.

At select college football games this season, AT&T will have an AT&T Fan Zone Tour Truck or its Amplified #Techgating Tour Truck on campus to promote #techgating. Fans can engage in a number of activities from a fight song mash-up station to a social-enabled photo booth:

You can check the schedule here to see if AT&T is coming to your school.

As Forbes contributor Alicia Jessop so aptly put it, there’s one tried-and-true way to a college student’s heart: free food. For that reason, last week’s partnership between the University of Miami and Buffalo Wild Wings was brilliant: for every third down on which the Miami defense forced Duke to punt, students would receive one free buffalo wing from a Buffalo Wild Wings near the campus.

As Jessop points out, the promotion was great on several fronts: it enticed students to increase their level of energy during those important third downs, it reinvigorated a relationship with an existing partner, and it offered the partner something it wanted by bringing in student business.

Approximately 500 students did visit the restaurant within the first 24 hours, amounting to approximately $5,600 in free food based on the $11.29 menu price of a 10-piece order. Miami and Buffalo Wild Wings quickly reconvened and agreed to cease offering the wings, which were originally supposed to be offered through Monday. However, the promotion will continue for the rest of the season—just expect a limit to be put in place before the next game.

Lil Jon’s “Turn Down for What”

We would be remiss if we didn’t give a nod to Lil Jon for his song “Turn Down for What,” which college football fans around the nation now associate with “Third Down for What.” We hear multiple schools are using it for third downs, including Tennessee, who we covered during Week 1. It was also the tune Miami chose to promote the Buffalo Wild Wings promotion.

“It’s On Us” Campaign

We caught wind of this one happening at Penn State, but multiple colleges and conferences, and even the NCAA, have signed up to be part of the campaign. The White House and the Center for American Progress’ Generation Progress recently launched an initiative to prevent sexual assault, particularly on college campuses. Over 200 colleges and universities have signed on as partners, with Penn State doing its part last weekend by airing the PSA on its video board during the Northwestern game.

Penn State instituted a sexual assault task force last summer after its own well-publicized issues with this nationwide epidemic. It’s great to see Penn State leading the charge on spreading the world about this new campaign.

Us too. That’s why it’s tough to blame Kansas State head coach Bill Snyder for wearing a windbreaker this season which sported the Buffalo Wild Wings Bowl emblem. The Wildcats ended last season with a win against Michigan in the Buffalo Wild Wings Bowl out in Tempe, so for the first few games of this season Snyder wore a purple windbreaker from the bowl that featured the bowl emblem. That’s until he got a letter from the Big 12 asking him to stop advertising for a bowl that’s now nonexistent (at least in Tempe). Its replacement—the Catcus Bowl—does not have an agreement with the Big 12.

“Truth be known, I got a memo from the conference office that said whatever bowl was on the back is no longer a conference bowl,” Snyder said. “So I thought that if we cannot get that bowl game again, I am not going to advertise for them. That is a true story.”

UMass recently renovated and reopened its on-campus McGuirk Alumni Stadium just in time for football season. Unfortunately, that renovation did not include a permanent video board, so UMass rented one and hoisted it on a hydraulic lift. It appears that lift failed during the third quarter of last Saturday’s game.

The video board that collapsed at UMass. pic.twitter.com/AaXJCF6d7m

Announcer during UMASS game: "The video board just fell." pic.twitter.com/OA0LSc2lnM

The Daily Hampshire Gazette reported a replacement will be rented for the two home games at McGuirk remaining on the team’s schedule. (UMass plays a portion of its home schedule at Gillette Stadium, home of the NFL’s New England Patriots.)

Miscommunication Between Michigan and Coca-Cola

Early last week, it was discovered that Michigan fans could receive two tickets to last Saturday’s game against Minnesota for approximately $3. All they had to do was buy two Coca-Cola products as part of a promotion by the soft drink company.

Coca-Cola had purchased a block of tickets from the school to use for the promotion, but Michigan says it never gave final approval for the promotion. When Michigan found out about it via Twitter, officials had the promotion pulled. Unfortunately, not before some negative headlines like this appeared: “Michigan is almost begging students to come to Saturday’s game” (USA Today). Michigan has struggled with student attendance this year, with student ticket sales reportedly down from 21,000 in 2012 to 14,000 this year.

Tickets obtained through the promotion prior to Michigan interceding were honored on Saturday. It was unknown just how many tickets were at issue, but the Michigan Daily did report at least one location sold out.

Last, but certainly not least, is the firestorm brewing in Ann Arbor over head coach Brady Hoke’s decision to leave QB Shane Morris in after an apparent head injury. The signs were so obvious to others that even the announcers commented on it during the game, an unusual occurrence.

“That No. 7 is still in this game is appalling. It is appalling that he was left in on that play to throw the ball again as badly as he was hit by Cockran,” announcer Ed Cunningham said on ESPN.

Hoke denied Monday having any inclination that Morris might have suffered a concussion, adding he would have practiced with the team Sunday night if he hadn’t been nursing a high ankle sprain also sustained in Saturday’s game. Michigan Athletic Director Dave Brandon claimed everyone involved in the issue met on Sunday, but Hoke said he hadn’t spoken to Brandon as of Monday afternoon. The inconsistencies in what we’ve heard from Hoke and the rest of the administration in the days since the incident are drawing further ire.

Brandon has since admitted to a “serious lack of communication” on the sideline on Saturday. Unfortunately, everyone from fans (9,000 of whom have signed an online petition and protested publicly Tuesday evening) to a congressman who is the co-founder and co-chair of the Congressional Brain Injury Task Force are calling for Hoke’s immediate dismissal. Many are fed up with AD Brandon as well.

University President Mark Schlissel, who’s only been at the helm for a couple of months, issued an apology admitting the mishandling of the situation:

“We did not get this right and for this I apologize to Shane, his family, his teammates, and the entire Michigan family. It is a critical lesson to us about how vigilant and disciplined we must always be to ensure student-athlete safety.”

Does your athletic department need help with social media or public relations? Check out our new sports practice or contact Kristi Dosh for more information.